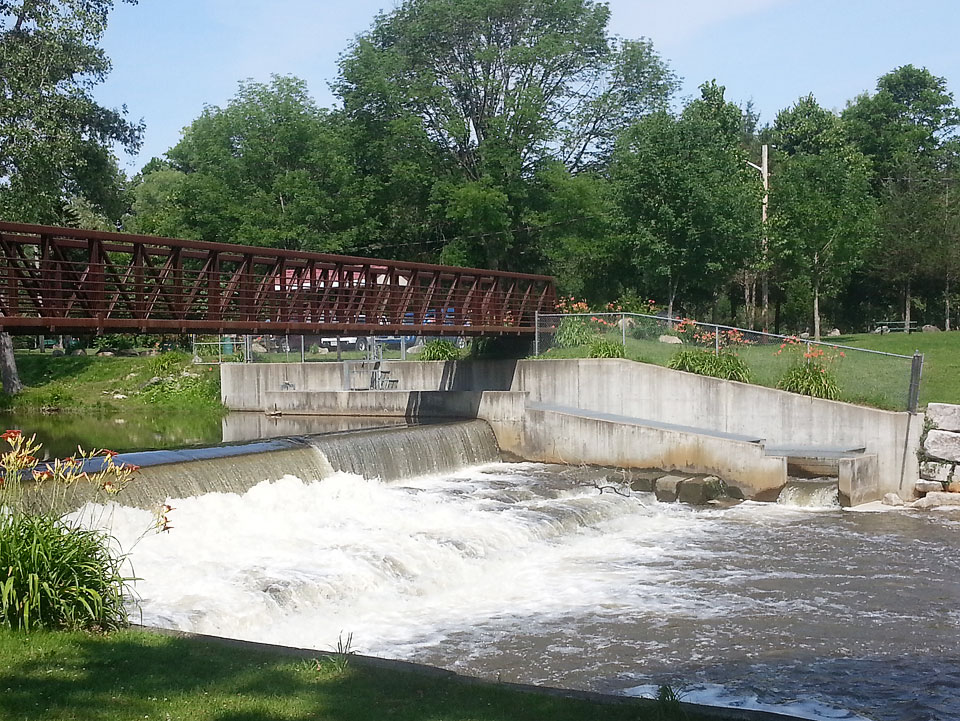 Researchers at U of G are helping to turn small dams around Ontario into mini powerhouses pumping out renewable energy, particularly for rural users.

With promising results from one site already, Lubitz says the team plans to look at “micro hydro power” drawn from more of the numerous streams and rivers across the province and even the United States.

They’re looking at thousands of small dams — with a “head” or water drop of only about two to six metres — scattered across Ontario. The Grand River watershed alone contains some 800 dams, including many candidates for micro hydro power.

Micro hydro power is measured in tens or hundreds of kilowatts, compared to the millions of kilowatts produced in Niagara Falls-sized power plants.

The Guelph team is adapting a technology developed by ancient Greek mathematician Archimedes. The Archimedes screw is based on moving water along the spiral threads of a large turning screw, a concept used for millennia for pumping irrigation water, says Lubitz.

Water flowing over a dam enters a channel containing a screw. The weight of the falling water turns the screw, and the resulting mechanical energy is converted to electricity.

The technology can even help fish move between water bodies, says Gharabaghi. “It’s a way to produce electricity but in an environmentally friendly way.” 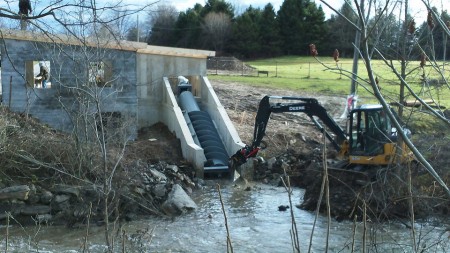 GreenBug connected with U of G’s Catalyst Centre (formerly the Business Development Office) through Innovation Guelph downtown. By 2011, the company had already developed a working prototype, but it faced many questions in scaling up the concept to a full installation.

What Lubitz thought would be “a fun little project” has become a research-intensive undertaking involving mechanics, physics of water flow and optimization.

Despite the concept’s longevity, and its use today in a number of European countries, little is known about building the best Archimedes screw. How does the water move along the threads? How much potential energy is lost to water movement? How big to make the screw? How much power is generated?

GreenBug’s first working site — and the first such site in the Western Hemisphere, according to CEO Tony Bouk — is located on a Waterford, Ont., horse farm and generates enough power to help run part of a barn.

Using field data from that installation, and numerous lab size screws that were run in a test rig on campus, Lubitz and his team have built models to explain and predict power from any screw.

His investigations have led to more unknowns. How to make best use of this technology on small rivers whose flow varies by season and even day to day?

In Guelph’s School of Engineering, Gharabaghi had already developed a tool for assessing stream flow rates, working with the Ontario Ministry of Natural Resources. By plugging in data about a particular watercourse, users can design the right turbine for a particular location, he says. That’s also useful information for obtaining necessary provincial permits to refit existing dams to generate electricity.

That’s all appealing to GreenBug, which looks to reduce engineering and permitting costs that can mount into hundreds of thousands of dollars for a single installation. The U of G team hopes to help streamline that process and save as much as 40 per cent of those soft costs of development.

Small-scale dams equipped with Archimedes turbines might enable users in rural Ontario to generate power for one to several hundred households, says Gharabaghi.

Looking to match designs for particular sites, Lubitz encountered other complications beyond stream flow rates. It started to look like the kind of computational problem that Taylor confronts in studying neural networks and machine learning.

“You want to build a customized screw, but there are so many options,” says Taylor. “This was similar to the problem we face optimizing neural networks.”

All three Guelph engineers are now working with GreenBug. The company, which won the 2015 3M Environmental Innovation Award, expects to install screws in Delhi and at a former mill in Rhode Island this year, and is considering another 10 sites around Ontario.