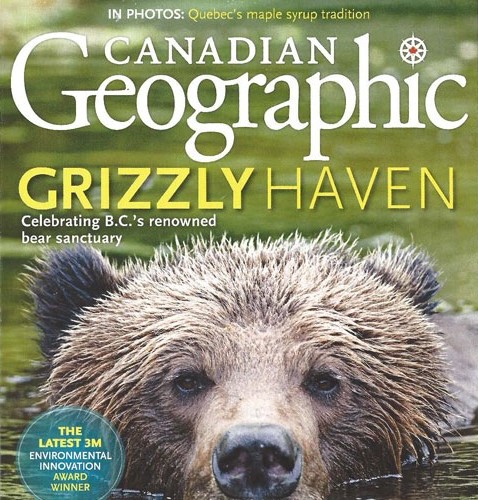 The April 2016 issue of Canadian Geographic features an article on GreenBug Energy.

The article includes a two page spread of a very informative graphic that is shown below.

We’ve included a copy of the online article below as well but you can also read it here: Canadian Geographic 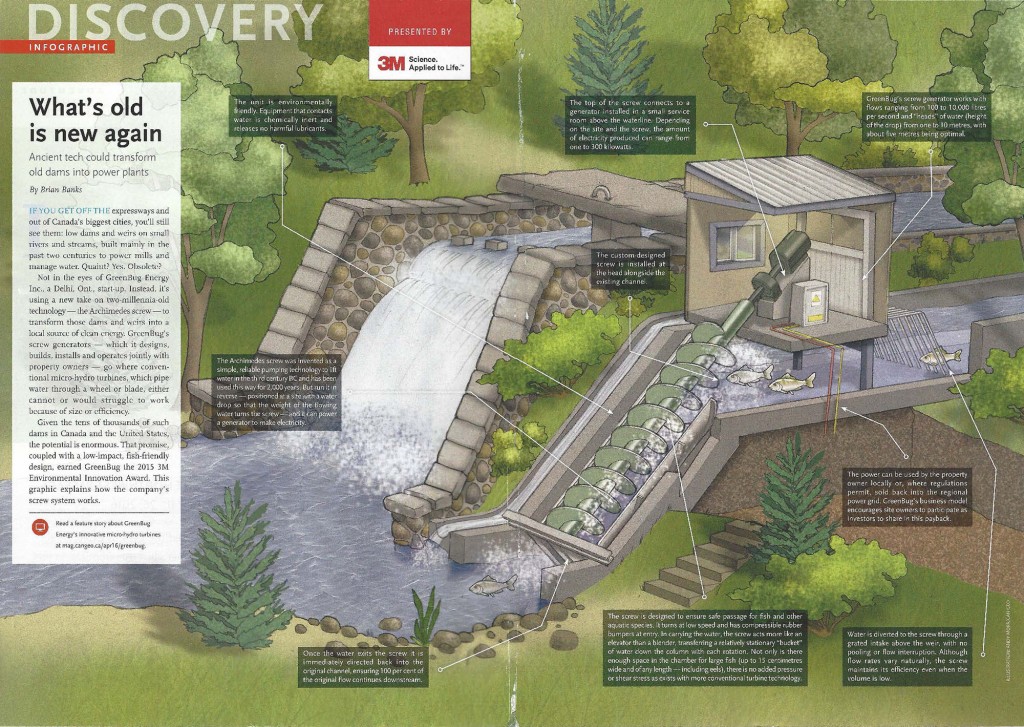 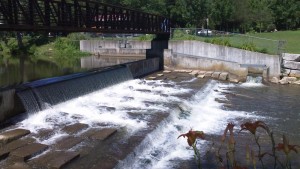 That’s just one tiny detail in the many-layered story of GreenBug Energy Inc. Founded in Delhi, Ont., in 2011 by entrepreneurs Tony Bouk and Brian Weber, GreenBug is vying to create an entirely new segment in the North American micro hydropower market. 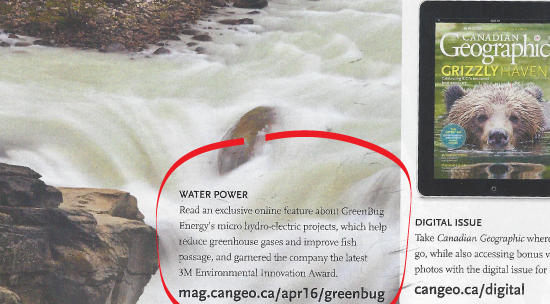 To do it, GreenBug is combining advanced engineering and design and a 3,000-year-old pumping technology, the Archimedes screw, to make electricity. The learning curve has been steep, and the regulatory process complicated. But with the company’s first larger-output, fully commercialized micro hydropower systems poised for final approval and installation this summer — in hometown Delhi and the state of Rhode Island — 2016 could be a breakout year. Says Bouk: “We’re hoping it scales from here.”

GreenBug’s story starts with an untapped old resource: thousands of low dams across Canada and the United States built in the past centuries to control water or to power mills. Many of these structures are still standing — in towns, on farms, on both public and private property — and deliver enough water to drive turbines to make electricity.

Before GreenBug, however, there wasn’t any economical, environmentally sound technology to tap it. While micro hydro and run-of-river power generating ventures have been on the rise overall, these smaller dams — typically one- to five-metres high, with potential power output up to 300 kilowatts — have seen relatively little action. Instead, most equipment and project design has been aimed at sites with greater heights, or heads, of water, and larger power output.

That bias was evident when Bouk and Weber, already partners in a manufacturing business, first looked into smaller dams in 2010. A year earlier, Ontario had introduced the Green Energy Act, which enabled and encouraged renewable power development for private use or sale to the grid. Bouk was keen to leverage the program to start a small-scale, clean-power venture to “do something” to fight climate change. But equipment makers they spoke to said if a site’s potential was less than 500 kilowatts, “don’t even bother.” Bouk and Weber weren’t convinced. “There’s one of those small dams in just about every town,” Bouk says. “We thought that was interesting.”

Research led them to Europe, where they found a small number of micro-hydro developers using the Archimedes screw to generate electricity. Installed next to a dam, the screw turns under the weight of water directed over it. That action turns a gearbox, which turns a generator, which produces power. The clinchers: Archimedes screw generators are non-polluting, fish friendly and optimally suited for low-head sites.

“First we thought we might source the equipment out of Europe, but at North American power rates, it was way too expensive,” says Bouk.

That might have been the end. Instead, for Bouk, a seasoned executive with an MBA from the Ivey Business School at Western University in London, Ont., and Weber, with a background as a tool and die maker, it just meant more variables to consider. “We knew what went into it and we decided we could do it here ourselves,” says Bouk. “We started saying, ‘Look, I think we can do that and make it make sense.’ ”

If making it make sense means building a profitable business, GreenBug still has a long way to go. But based on Bouk and Weber’s achievements to date — developing GreenBug part-time while supporting themselves through a separate, pre-existing company — neither does it seem far-fetched. From screw design and manufacturing to construction and operation, GreenBug’s now a vertically integrated operation with hard-won expertise; it’s got a long-term research contract with one university from the Natural Sciences and Engineering Research Council of Canada, an annual research and development budget of $200,000 to $300,000, installation contracts with at least a half-dozen clients awaiting regulatory approval, and last year it won the 3M Environmental Innovation Award, for creative solutions that protect, restore or preserve the environment.

And the backyard dam? That was at the start, at Weber’s place in Delhi. As soon as the pair decided to try making their own Archimedes screw generators, it became their first test site. Bouk, who says he’s “not too bad at math,” began working on a model in Excel using the site specifications to help them design the steel screw’s length, width, thread size and installation position, and predict what electrical output to expect. “Then being manufacturers, we manufactured a screw,” says Bouk. “A small one — probably a couple of feet in diameter, eight- or 10-feet long.”

They added a frame, connected it to an electric motor, installed it and “it turned out the thing produced within about five watts of what we thought it would.”

This proof of concept meant they had a potential business worth pursuing. But Bouk also knew his modelling work had just begun. “One of the things I realized right away is there are a ton of variables,” he says. “Water isn’t like solar, where you can put down panels anywhere and know all the parameters. Every site is unique. They all have different flows and heads and they vary through time. You need to take that data and somehow decide what kind of screw you’re going to put in, what’s going to produce the most power.”

Bouk’s model has been extensively refined since, so that given those parameters, it easily determines not just the optimal screw, but also a “system that will maximize internal rate of return.” Even early on, however, he and Weber knew enough about the screw generator’s performance to start talking to potential clients. Within a year, they signed a deal for their first small-scale grid installation, at Fletcher’s Horse World, a farm and event centre in the nearby town of Waterford. The screw, 1.7-metres wide and five-metres long, with a modest maximum output of 7.2 kilowatts was installed at an old dam on a residence driveway. The centre uses the power onsite, offsetting its previously high electricity bill through Ontario’s “net metering” program.

Bouk says owner John Fletcher was an easy sell. “We literally just drove in to his driveway, cold call,” says Bouk. “Right off the bat he said, ‘Let’s do it.’ ”

It sounds auspicious, but it wasn’t. In the three years since, despite increasing research, market development and community outreach, and actual deals made with individuals, municipalities and conservation authorities around the province, GreenBug has but one grid-connected Archimedes screw generator installation.

The problem isn’t the technology or project economics, assures Bouk. “They can make money,” he says. Instead, it’s the slow, multi-stage provincial Feed-In-Tariff contract and environmental assessment approvals process under the Green Energy Act, which is required in order to sell power back to the grid.

“It’s challenging,” says Bouk. “It takes years, literally, to get a project through.” We’re trying to whittle that down because our sites are small, and we’re trying to standardize the process.”

It’s not just Bouk and Weber who are chomping at the bit. In southwestern Ontario’s Norfolk County, councillor Jim Oliver first heard about GreenBug’s technology in 2011, after the Fletcher farm installation. Soon, he was backing a deal with GreenBug to install a 53-kilowatt screw generator with a 1.9-metre head at Delhi’s Quance Mill dam, on Big Creek, in historic, County-owned Quance Mill Park. It’s one of the two installations GreenBug’s hoping to do this summer, and Oliver’s ready to see it happen.

“They have been going through the final stages of the environmental assessment and to the best of my knowledge that has pretty much been concluded,” says Oliver. “We’re all anxious for this one to start shovels in the ground.”

Every GreenBug screw generator project is a self-contained, separate partnership with the site owner. In this case, Norfolk County kicked in a small amount of money, plus the site, while GreenBug’s putting up a significant part of the capital. For that, the company will get most of the returns from the electricity sold to the grid under the project’s Feed-In-Tariff contract. The county, meanwhile, gets to showcase its leadership on renewable energy and support a local business. Says Oliver: “I think we all bought into the potential that their technology and their particular service could achieve if it catches on.”

GreenBug’s other pending project, awaiting final approval in Rhode Island under that state’s renewable energy program, will be its largest to date. It’s a double-screw project with an expected maximum output of 360 kilowatts. And even though it’s called micro hydro, Bouk says it will take four or five semi loads to ship all the pieces from Delhi. Each screw — 13 metres long, 2.8 metres wide and weighing 20 tonnes — requires its own truck.

Assuming they’re approved, completing both of these projects in 2016 will keep Bouk and Weber busy. But to build further in 2017, GreenBug needs to win some Feed-In-Tariff contract approvals. Its next chance comes when the province announces results of the latest round of applications in the second quarter of 2016.

Two installations this summer will be a good start, he says, “but I’m hoping we put in more than that next year.”

Bouk is wary of false hopes, just as he’s realistic about GreenBug’s long-term obstacles and business risks. But he’s also very clear where he stands. “Renewable energy is something that’s going to be around,” he says. “We are on the right side of the curve.”