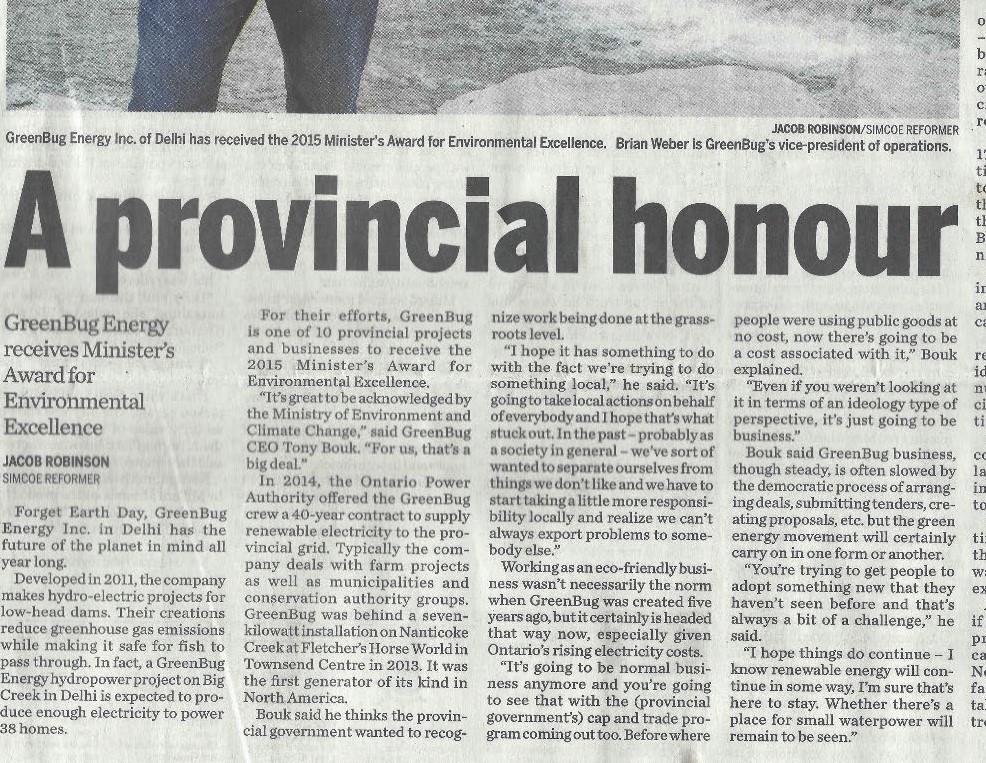 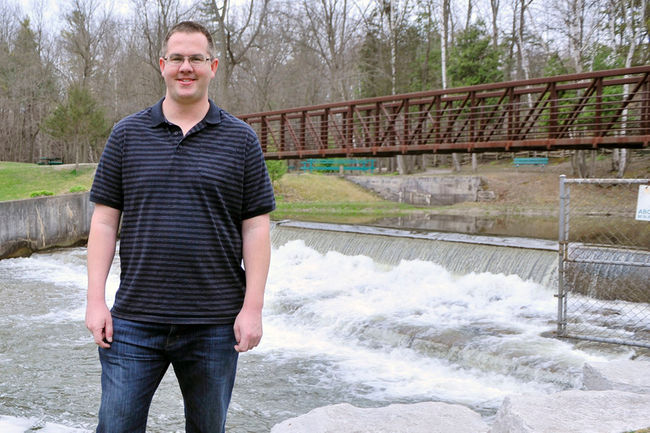 Forget April 22, GreenBug Energy Inc. in Delhi has the future of the planet in mind all year long.

Developed in 2011, the company makes hydro-electric projects for low-head dams. Their creations reduce greenhouse gas emissions while making it safe for fish to pass through. In fact, a GreenBug Energy hydropower project on Big Creek in Delhi is expected to produce enough electricity to power 38 homes.

For their efforts, GreenBug is one of 10 provincial projects and businesses to receive the 2015 Minister’s Award for Environmental Excellence.

“It’s great to be acknowledged by the Ministry of Environment and Climate Change,” said GreenBug CEO Tony Bouk. “For us, that’s a big deal.”

In 2014, the Ontario Power Authority offered the GreenBug crew a 40-year contract to supply renewable electricity to the provincial grid. Typically the company deals with farm projects as well as municipalities and conservation authority groups. GreenBug was behind a seven-kilowatt installation on Nanticoke Creek at Fletcher’s Horse World in Townsend Centre in 2013. It was the first generator of its kind in North America.

Bouk said he thinks the provincial government wanted to recognize work being done at the grassroots level.

“I hope it has something to do with the fact we’re trying to do something local,” he said. “It’s going to take local actions on behalf of everybody and I hope that’s what stuck out. In the past – probably as a society in general – we’ve sort of wanted to separate ourselves from things we don’t like and we have to start taking a little more responsibility locally and realize we can’t always export problems to somebody else.”

Working as an Eco-friendly business wasn’t necessarily the norm when GreenBug was created five years ago, but it certainly is headed that way now, especially given Ontario’s rising electricity costs.

“It’s going to be normal business anymore and you’re going to see that with the (provincial government’s) Cap and Trade program coming out too. Before where people were using public goods at no cost, now there’s going to be a cost associated with it,” Bouk explained.

“Even if you weren’t looking at it in terms of an ideology type of perspective, it’s just going to be business.”

Bouk said GreenBug business though steady is often slowed by the democratic process of arranging deals, submitting tenders, creating proposals etc. but the green energy movement will certainly carry on in one form or another.

“You’re trying to get people to adopt something new that they haven’t seen before and that’s always a bit of a challenge,” he said.

“I hope things do continue – I know renewable energy will continue in some way, I’m sure that’s here to stay. Whether there’s a place for small waterpower will remain to be seen.”